Strategically placing a small percentage of prairie strips within agriculture fields has been shown to reduce field level soil loss. However, less is known about in-field soil movement both erosion and deposition. Also, with the potential for increasingly stronger rainstorms and hence higher runoff, there is a need to obtain new insights about prairie strips design and its influence on sediment dynamics. The objective of study completed by Luquin Oroz (2016) was to analyze strip width impact on soil and water movement. Different strip widths were analyzed under a range of rainfall intensities using the event-based, hydrological and soil erosion model LISEM. The results show that sediment trapping efficiency (STE) increased directly with width, however decreased with increasing rainfall intensity. On average, STE increased by 8% as the width of the filter increased from 4 to 14 m. Detachment and soil loss mainly occurred in rills caused by concentrated flow. Overall the first meters of the prairie strips experienced the most sedimentation but in places where rills crossed the buffer, stream power and turbulence resulted in sedimentation along the prairie strips. 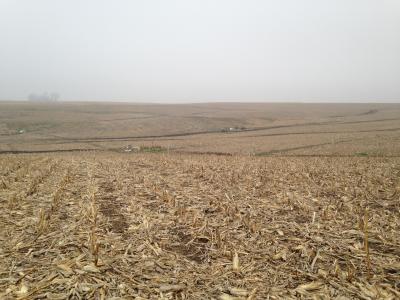 The modeling conducted by Luquin Oroz (2016) used the Interim 1 watershed located at the Neal Smith National Wildlife Refuge. This watershed has been studied for sediment and nutrient loss with runoff since 2007. The following land use scenarios were used in the modeling (Fig. 1):

Various rainfall intensities were studied and the soil loss or gain maps from the most intense event are shown in Figure 2. Of note is that there is substantial deposition zones at the leading edge of the prairie strips. When the prairie area is confined to the footslope position (Fig. 2a) this deposition all happens at the bottom of the watershed and the in-field soil movement to the downslope position is not decreased. When examining the scenarios where the strips are placed both at the footslope and at intervals along the contour there are deposition zones at each of the prairie strips cropland interface locations. As a result some of the soil movement is stopped before the soil is moved all the way to the footslope location illustrating some of the benefits provided by prairie strips along the contour. This modeling work provides a framework for additional studies to predict the impact of various prairie strip configurations on sediment movement.

Luquin Oroz completed his Master of Science degree in International Land and Water Management program at Wageningen University. He was supervised by Drs. Jantiene Baartman, Saskia Keesstra, and Richard Cruse. Dr. Cruse is a member of the STRIPS team.

Fig.1.Strip width design for each scenario. 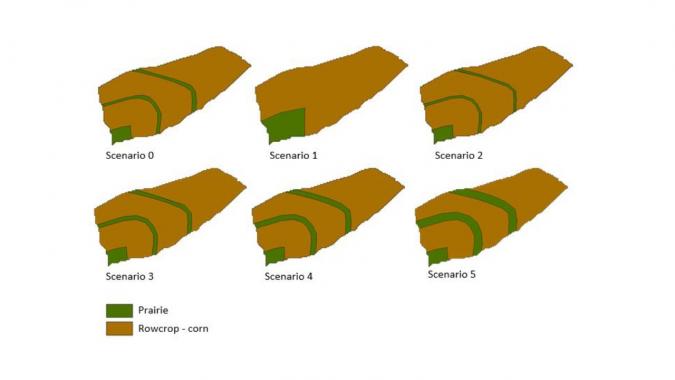 Fig. 2. Soil loss maps for scenarios under the highest event with intensities reaching up to 159 mm/hour estimated by LISEM: (a) S1-double buffer at the toe; (b) S2-4 m; (c) S3-7.5m; (d) S4-10m; and (e) S5-14m. A positive number indicates detachment whereas a negative value shows deposition. Zero values are cells where detachment is equal to sedimentation. 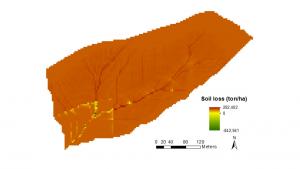 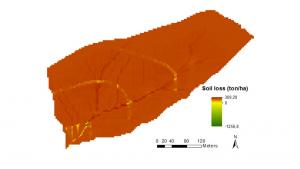 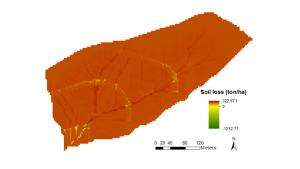 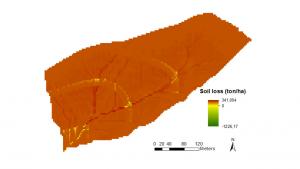 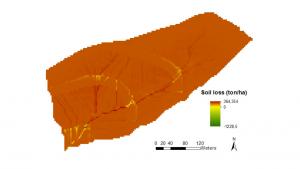