For those of you not lucky enough to be a graduate student in Sustainable Agriculture at Iowa State, you should know that one of the major strengths of the program is the class SUSAG 509: Agroecosystems Analysis, or simply “509.”  After being admitted to the program last spring, I was thrilled to find out that I would get to spend a week in August driving around Iowa for credit: “You mean I get to meet Iowa farmers, talk cover crops, soil quality, and corn production?” Maybe that isn’t everybody’s idea of a dream vacation, but as a newcomer to the Midwest and long-standing ag nerd, I was definitely pumped. Since not everyone is lucky enough to be in my program or to have taken this class, I thought I’d share some of the major insights I gained. Spread over two posts, I’ll first discuss nutrient cycling and its role in agroecology, and then examine a couple of the sites on our field trip from the lens of ecological economics.

If you’ve taken an ecology class or pay attention to ecological issues in agriculture, you’re probably familiar with nutrient cycling. Nutrients are the abiotic building blocks of all the living creatures. As such, the management of their movement in agriculture has profound implications for soils, crops, waterways, and the broader landscape. But even on the micro-level, there are many complexities to them. The term “nutrients” represents over a dozen different elements each with a variety of chemical forms. Nutrients can be either available or unavailable for plant uptake, depending on both their chemical form and physical circumstances.

In studying nutrient dynamics within soils, one thing quickly becomes clear: soil organic matter plays an important role. Soil organic matter consists of, essentially, bits of dead things – plants, mostly, but also all other manner of soil biota and their products. While that dead material exists in various stages of decomposition, the early stages of these serve as a food source for a myriad of soil organisms. These soil organisms play a direct and diverse role in the chemical and biological paths that nutrients follow while in the soil (Magdoff, Lanyon, and Liebhardt 1997). Nutrients can become available through such pathways as mineralization of soil organic matter by a variety of organisms, enhancement of plant nutrient uptake directly by mycorrhizal fungi, and nitrogen fixation by bacteria that can be both free-living and symbiotic with plants.

In natural ecosystems, nutrients follow a tight cycle of nutrients, from soil to plant to soil. However, agriculture, by its very nature, has always required the “export” of nutrients (Magdoff et al. 1997). Grain, vegetables, meat, fiber, hay: when they leave the farm, they also remove the nutrients inside them. Long before soil scientists uncovered the chemical pathways of soil nutrients, farmers understood that certain types and frequencies of crops could deplete the nutrients in the soil. For a long time, farmers used biological materials and processes to replenish these nutrients that had been removed from the soil, through such practices as rotating crops and applying manure.

With the advent of chemical fertilizers, this began to change. Farmers were able to stop using biological processes to replace exported nutrients. Anderson (2009)describes how chemical fertilizers became cheap and commonly used after World War II. New crop varieties could be grown closer together but also required higher levels of nutrients, and farmers became more and more dependent on chemical fertilizers. Farmers were no longer dependent on the limits of biological cycles for replenishing nutrients (there’s a maximum level for the amount of manure that livestock produce or the amount of biomass that cover crops create). Instead, the limits to nutrient application were in the supply and price of chemical fertilizer. Fertilizer could easily be applied in excess. 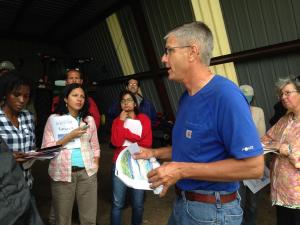 The use of chemical fertilizers as a source of crop nutrients has impacted the Iowa landscape in three ways. First, as we learned on our field trip, chemical fertilizers are at the root of significant water quality issues in Iowa, stemming from the ability to import more nutrients than are needed and used. While concern about nutrient runoff began in the 1960’s in Iowa (Anderson 2009), it still persists today. We met with several folks who work to stem the escape of excess imported nutrients. One of the farmers we met, Tim Smith, discussed the complexities of planting cover crops. Among other benefits, cover crops can curtail the loss of nitrogen by holding it over the winter and then releasing it when tilled just in time for a spring crop to take it up. We also spoke with Chad Ingels of ISU Extension and Outreach, who gave thorough accounts of how denitrifying bioreactors capture nitrate from field runoff (some of Chad’s video footage of bioreactors is here, here, here, here, and here). We also visited one of the prairie STRIPS trial sites, and learned how prairie plantings can capture sediment and nutrients in field runoff. Finally, at the Des Moines Water Works, we saw some of the downstream consequences of nutrient runoff: the facility has an expensive backup capability to remove nitrate from river water when nitrate levels are too high (recent news coverage of the related lawsuit can be found here and here).

Second, the use of chemical fertilizers has also impacted livestock management. Magdoff et al. (1997) describe how older agricultural systems cycled nutrients from soil to crop to livestock to people and back within a relatively small geographic space. Crops and livestock depended on each other for nutrition: crops fed livestock, and livestock manure was returned to the soil as a source of crop fertility. Keeping livestock geographically close to crops made sense. We saw modern examples of this on Gibralter Farms in Iowa Falls, which endeavors to produce as much feed on farm as possible. They have economic reasons for doing so – feed is a cost – but another advantage is that the feed and the manure are both geographically proximate. But in Iowa, the crops and the livestock are often quite separate on the landscape: grain is shipped to where livestock live. Livestock manure is often treated as a waste rather than a resource for nutrients, and that concentration of nutrients ultimately causes significant environmental problems with pollution of air and water (Osterberg & Wallinga, 2004). We saw some evidence of these manure issues on our trip: at Couser Cattle Company we learned about how their constructed wetlands are there to catch and filter manure overflows.

Finally, the use of chemical fertilizers can degrade soil health. Healthy soil ecology can benefit crops through improving nutrient availability. But in providing the nutrients via chemical fertilizers, farmers can essentially ignore whether soil organisms are healthy or even present. We learned about this during our trip to the Doolittle Prairie. While corn and soy fields stretch off in every direction, this prairie fragment has never cultivated. Doolittle Prairie was possibly my favorite stop during our whole trip: I got to check “hold prairie soil in my hand” off my bucket list. 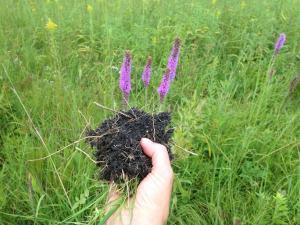 When we took a detour to a soybean field just next to the Doolittle Prairie, we saw stark differences in soil structure and general tilth resulting from differences in management. The prairie offered a glimpse of the historically rich prairie soil that Mutel (2008) describes, while the soil in the soybean field barely thirty feet away had similarly high organic matter but very poor soil structure and no visible soil organisms. We guessed that that soybean field must be chemically fertilized and regularly tilled to yield such a combination of blocky soil but vibrantly green soybean plants.

Ultimately, managing agricultural systems can be done in accordance with ecological principles. While many farmers currently rely on chemical fertilizer inputs, the cycle in nutrient cycling needs to be re-established. Currently, it is more of a chain: nutrients enter the agricultural system at one end as fertilizer and end up in manure lagoons or in downstream bodies of water. A couple of our class readings examined of how this cycle could be re-established through altering crop and livestock systems. They examine individual and regional (re)integration of livestock and crop systems, and emphasize the importance of meeting farmers’ management goals as well as they would be met in the original system (see Russelle, Entz, and Franzluebbers 2007 for more detail). Another envisioning of an integrated landscape was evaluated in Santelmann et al (2004). Different land management scenarios were evaluated for two regions in Iowa, including one scenario that integrated livestock and crops. They projected that this latter scenario would result in improvements in most ecological, economic, and social factors.

So those are the first round of my takeaways from 509, which combine insights from the field trip with those from in-class discussions that lasted throughout the semester where we learned the theory behind the practices we’d seen firsthand. In interest of full disclosure, you should know that Dr. Schulte Moore was one of the professors. Check back soon for another favorite topic in round two: ecological economics.

Anna Johnson is pursuing a Master’s in Sustainable Agriculture under the direction of Drs. J. Arbuckle and Lois Wright Morton. Prior to enrolling at Iowa State, she worked for several years at the U.S. Department of Agriculture in Washington, D.C.