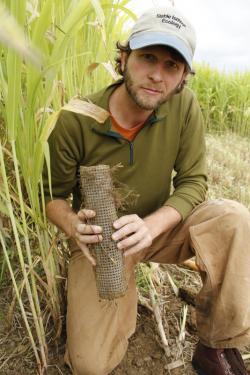 What do National Beer Day (April 7) and National Tortilla Chip Day (my personal favorite, Feb. 24) have in common? Neither would be possible without soil. Good thing Dec. 5 was World Soils Day!

“For each 1% increase in soil organic matter, soil can store an additional 20,000 gallons of water.”

That’s an impressive statistic! According to the USGS, the average person uses 80 to 100 gallons of water per day in the US.  This means the extra water stored from increasing organic matter just 1% would last most of us up to 9 months for all the water we use in our daily activities.  I can imagine what a game changer that would be for water thirsty crops, particularly in drought years like much of the central US has seen the past two summers.

But what does that statistic really mean? My first reaction to that impressive number was to ask how much soil is needed for that kind of water storage? An acre? A hectare? Thinking about it, it must be based on a soil volume; but how deep?  A foot? A meter? Is it as true for a Montana barley field as it is for an Iowa corn field?

Digging into it (bad soil pun, sorry...), I started seeing that or similar estimates popping up in other places—all without reference to a data source. To my nerdy satisfaction, several sources did provide an estimate of area and depth, but these estimates seemed pretty variable. For example, one source reports increasing organic matter 1% stores 22,000 gallons of water per acre to a depth of 30 inches. Another reports that raising organic matter 1% leads to storing 16,500 more gallons of water an acre to a depth of one foot—an almost 90% higher increase per inch of soil compared to the previous estimate!

Rather than take estimates like the “1% soil organic matter stores 20,000 gallons of water” at face value, I think it’s important to consider where such estimates come from, so we can better understand what they mean and how to use them. So I asked: why were these estimates so different? Surely there’s a solid body of scientific literature these estimate are derived from to be so prevalent in the both popular media and technical reports. My curiosity was piqued, and I had to get to the R-horizon (soil speak for “bottom”) of this.

After extensive searching, I found several reports that cite a paper published in 1994 in the Journal of Soil and Water Conservation by Berman Hudson. However, in looking at this article, I found that the author never derives any estimates of gallons of water storage from increased organic matter. In true scientific fashion, the paper contains tables with means and estimates of coefficients of variation.  Even this soil scientist found it hard to visualize what the results would mean for storing water in the dark crumbly soil I love to see in my garden.

But a key point is made clear in the final figure of Hudson’s paper: soil textures (the amounts of sand, silt, and clay that make up a soil) have a huge impact on the change in water holding capacity of a soil with increased organic matter.  Because of the big differences in the surface area of soil particles, large particles like sand grains really can’t hold a candle to the really small soil particles like silt and clays in terms of holding on to water. And this affects how increases in organic matter can change water-holding capacity, too. Boost organic matter 1% in a sandy soil, for instance, and water holding capacity increases. But that same increase in a silty loam soil will store even more water.

How much water, you ask?  This report from the Northern Colorado Water Conservancy District (using data from Hudson’s regressions) shows that increases in plant available water were almost 70% higher in the silty loam compared to the sandy soil for the same change in organic matter.

There is no arguing that boosting organic matter in our soils is a key part of healthy living soils that produces all manner of benefits for us.It’s also apparent that, upon closer inspection, the level of benefit we get for that boost is not universal: the benefit depends on the texture of the soil being considered, which differs from place to place. I never did get an answer to the question of where those estimates that were so different came from, and—despite their huge implications—it doesn’t seem like there is an extensive body of scientific literature supporting them. But at least now we have a pretty good idea why they were so different.

In sum, it doesn’t matter if you are an Iowa corn farmer, a Montana barley grower, or just someone like me who enjoys a washing down a pile of tortilla chips with a hoppy brew to celebrate World Soil Day, soil organic matter is something we all depend upon. And if we have more hot, dry summers like the past two, it’s something everyone will depend on even more—no matter where you live. Still, it would be nice to have more scientifically based data to work from.