What do Yellowstone National Park, J.K. Rowling’s Remus Lupin, and this post about ecological economics have in common?

Did anyone else read Saki’s short story The Interlopers in high school English class? If not, you can google it; it’s quite short. Here’s a summary: two men, who have feuded their whole lives, are out hunting each other in a forest. Suddenly, a tree falls and traps them both. First, each angrily swears that his group of friends, who are elsewhere in the woods, will kill the other when they arrive. But gradually, as they wait, they decide to end their lifelong feud and become friends. This idea brings them great joy, and they talk of plans to publically declare their friendship. Then they see figures coming over the hill, and eagerly strain to see whose group of friends is coming to free them at last. But the approaching figures are not their friends. The story ends with one chilling word: wolves.

I remember my high school English teacher drawing concentric circles on the blackboard to illustrate the different layers of conflict in this story. The inner circle represented social conflict: person against person and feuding family against feuding family. This conflict is resolved when the two enemies, trapped and helpless, decide to set aside their differences and end their feud. But the outer circle represented the story’s bigger and dominant conflict, with a different resolution: person against nature. Whether or not the two men are friends or foes, they are still subject to the forces of the natural world and are, in fact, doomed.

Saki’s is a dark story, to be sure. This might be why, last fall, I found myself again and again remembering those concentric circles, which I last saw drawn on a blackboard sometime in 2003. But was I in another literature class? No. We were reading about ecological economics.

Readers may be familiar with the basics of the separate fields of ecology and economics. Ecology is the study of the relationships of organisms to one another and their physical surroundings, while economics is the study of the production, consumption, and transfer of wealth. There are different theories about the relationship between the two fields. Neoclassical economics, the dominant perspective in contemporary economics, holds that the natural world is subject to the laws of economics. If neoclassical economists were to draw the two circles of ecology and economy, the former would be inside the latter. Economics dominates ecology; the rules of economics trump the rules of ecology.

In our 509 class last fall, which I’ve written about before, we studied a different perspective: ecological economics. This field holds that the opposite is true: that there are fundamental limits to natural resources, and that these restrict the potential and scope of economic activity. As in Saki’s story, the field of ecological economics states that human systems exist within and are subject to natural systems.[1]

During our 509 class, before we even got a whiff of this concept, we got to smell two very different places: a small grass-fed dairy and a corn ethanol plant. At the dairy farm, we smelled damp grass, wet cow noses, and delicious cheese. At the corn ethanol plant, we smelled the yeasty tang of fermenting corn, and were dwarfed by the scale of the industrial machinery. The contrast between these two visits offers interesting fodder for understanding the ecological economic approach. 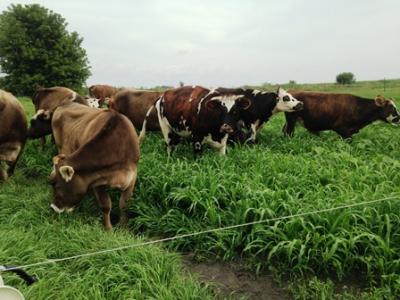 To illustrate the ecological economic concept of how an economic enterprise is embedded in its surrounding ecology, it is useful to examine how a business thinks about and works with its supporting  ecological systems.During our visit to the diary, we learned that they take great care to preserve and improve the soil quality of their pastures through planting species that will fix nitrogen. They also encourage biodiversity on their farm, whether in their mixture of pasture species, in the organisms in their soil, or in the natural habitat provided by tree lines. The farmers take an ecological approach in managing cattle pests and pasture weeds: they avoid the use of antibiotics for the cattle, schedule the pattern of rotational grazing to control pasture weeds, and manage flies with chickens, fly paper, and oil sprays rather than pesticides. They demonstrated a commitment to management that works with the ecological system it inhabits.

During our visit to the corn ethanol plant and to fields where corn stover is stored, we saw a much smaller emphasis on the ecological impact of business practices. The plant relies on massive amounts of corn in order to function, and we also saw many tons of corn stover harvested from a similar area. That corn is grown in the agroecological systems of the surrounding farms: from seeds, soil, water, air, and sunshine. But the only acknowledgement we heard of the business’ reliance on those ecological systems was in a discussion of the concerns about removal of potassium via corn stover from fields. There was no acknowledgement of the plant’s relationship with local biodiversity, or water quality, or pest management, as there was at the dairy farm. One way they might have done this would have been to offer a higher price to farmers selling corn that they grow in rotation, or that they plant with cover crops, or alongside prairie strips. This would have encouraged farmers to grow corn to sell them while also taking the broader ecological system into account.

Another compelling idea we came across in ecological economics was the contrast of quantitative growth and qualitative development. Daly (2005) argues that quantitative increases of economic activity – for example, the increase in the number of bushels of corn grown per acre – has physical limits and maintaining such growth is unsustainable in the long term. Qualitative development, on the other hand, is economic growth through the improvement in the quality of goods produced without necessarily increasing their quantity.

On our visit to the dairy farm, they demonstrated commitment to qualitative development. Originally they pursued quantitative growth – expanding the dairy herd from two cows to dozens – but it has reached a comfortable size and they have no plans to grow it further.  They instead have focused on qualitative development, such as improving the infrastructure of the farm through installing a wind turbine, and he talked about wanting to switch from disposable plastic milk bottles to recyclable glass. 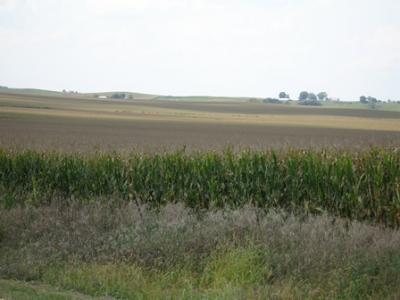 At the corn ethanol plant, we learned that they are gearing up to produce 55 million gallons of ethanol a year from thousands of acres of corn. We did not hear about plans for further growth, but the plant exists on a landscape where corn ethanol production has increased significantly in the last 10 years, a fine example quantitative growth. We also learned about current research on industrializing the process of breaking down corn stover to make ethanol, a trickier process than making ethanol from corn grain.

In ethanol production from biomass, a shift in feedstocks would be a potential avenue for qualitative development.  The production of corn, the current feedstock, is associated with various harmful environmental impacts – nutrient runoff, weed resistance to herbicides, soil erosion.  But diversified prairie offers a multitude of environmental benefits: increased habitat for animals and insects, reduced nutrient and soil runoff, reduced need for pesticides.  If ethanol producers could create ethanol from diversified prairie biomass, it would incentivize farmers to plant diversified native prairie.   There could be benefits all around: for farmers, ethanol producers, and Iowa ecology.  While the technology and infrastructure needed for this shift to make ethanol from prairie hay requires a great deal of as yet unrealized investment, the current related efforts in processing corn stover could be an important and informative intermediate stage towards ultimately processing prairie biomass.

This is only a brief into to the compelling field of ecological economics, and I would encourage everyone to read up on it. The article cited below is a good one, and the full text Ecological Economics by Herman Daly and Joshua Farley is on my reading list after the excellent selections we read in class. And if you haven’t figured it out by now, the answer to the title question is: wolves.

Anna Johnson is pursuing a Master’s in Sociology and Sustainable Agriculture under the direction of Dr. Lois Wright Morton. Prior to enrolling at Iowa State, she worked at the U.S. Department of Agriculture in Washington, D.C.

[1] Note that the lines between “human” and “natural” blur and even merge the more closely they are examined. Humans are certainly “natural” – we are physical, biological beings who eat and breathe and drink water; and the very concept of what constitutes “natural” is, in fact, a human idea. But for our purposes here, we’ll treat the two as distinct.