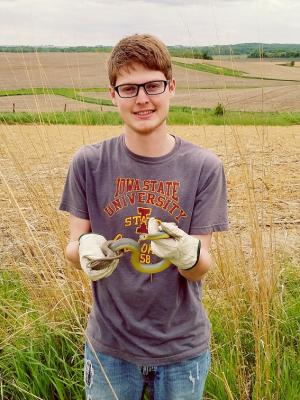 In the 1850s Iowa’s land cover was composed of about 80% grassland. Due to the increase in agriculture, Iowa’s grasslands have declined to about 20% and Iowa’s land cover is now composed of about 63% corn and soybean fields. This habitat loss has contributed to the degradation and fragmentation of remaining Iowa grasslands that many animals rely on. The impact of this large scale habitat change has not been well studied for snakes, amphibians, and small mammals. We're seeking to fill this gap.

From 2015-2017, we studied the distributions, species diversity, and encounter rates of reptiles, amphibians, and small mammals on farms in Iowa. To do this, we placed 719 (2’ by 4’) plywood cover boards in 178 grassy features on farms all around Iowa. These cover boards create a warm, protected habitat suitable for these animals. The boards were checked one to four times a month and we recorded the species present. When a reptile was captured we gave them a unique mark and looked for symptoms of Snake Fungal Disease (SFD).

During this study, we found 8 reptile, 4 amphibian, and at least 7 mammal species, which included 7 Iowa Species of Greatest Conservation Need (SGCN). Our results suggest that we discovered more species in contour strips planted with diverse prairie, but more data is needed. Of the 8 species of snakes we found, 35 of them were given unique marks for a capture-mark-recapture study. Unfortunately, our sample sizes and recapture rates were too small to estimate population sizes.

This study also identified the first reports of Snake Fungal Disease in Iowa (SFD). The symptoms of SFD were seen in four of the six species found, with infection rates ranging from 25-100% in affected species. Some snake species have high mortality rates associated with SFD and this disease could be a major conservation concern for snakes in Iowa in the future.

Snake Fungal Disease is a fungal infection that causes skin lesions by feeding on the keratin in snake’s scales, resulting in death for many species. SFD has not been reported in Iowa, but in 2017 we found clinical symptoms of SFD in brown snakes, eastern garter snakes, lined snakes, and prairie ring-necked snakes. Finding snakes with symptoms of SFD in not surprising, since there have been cases reported in Minnesota, Wisconsin, and Illinois.

Our study of reptiles, amphibians, and small mammals in Iowa agricultural landscapes is ongoing, so stay tuned!