On living with the wolf 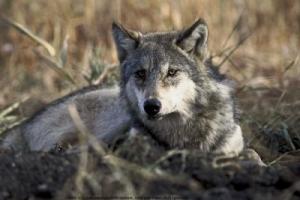 Gazing into the fiery green eyes of a wolf, Aldo Leopold felt the power that he and all humans have to alter our ecosystem. He felt the fragility of the earth beneath his feet. Though technological innovations have increased many societies’ abilities to produce food, increase efficiency, and exchange knowledge, it has also given power to the hand that once turned over the soil on its own. Our interactions with the environment—direct and indirect—wield far more power now than Leopold’s musket did in 1909. With such agency comes a responsibility to protect and nurture the lands that bear our livelihoods.

With economic pressures, agricultural production has dramatically changed over the past century, altering the soils, waters, and lives that it touches. With aspirations and dreams of freedom, prosperity, and the honorable intention of feeding families and communities, farmers have expanded their land holdings and adopted cost-saving practices with a transition to highly mechanized monocultures. Just as Leopold saw a green fire burning within the eyes of the wolf, prior to taking its life, I have seen the whimpering lands of the Midwest, withering away from the desiccating wind of our excessive demands. I have seen life rung out of the natural bodies that we depend on for substance.

In the next century, agricultural will again be transformed, pushed by moral assertions by a new generation of thought and heart-based expressions, or forced by new economic realities and ecological stresses. This transition will be slow, as many changes are, but it will be brought on through education and research, and most importantly by farmers. 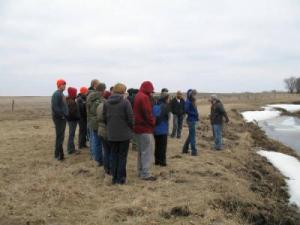 I was impressed by the Boon River watershed improvement program I observed on a class field trip this past March. Particularly, the involvement of traditionally conservative organizations, like the Iowa Soybean Association, is emblematic of the efforts and potential impact that the project could have. At a local, national, and global scale, there is increasing influence by private businesses and organizations over policy and resource sustainability. The Huffington Post and New York Times have gone as far as coining the “Second Gilded Age.” In this context, public-private partnerships will become essential to increasingly more corners of the political and social spheres.

In addition to being impressed by the organizational foundation that the Boone River watershed is built upon, I thought the farmer-oriented practices that they were implementing will be a fundamental element of their success.The farmer-oriented research and management trials seem to echo the intentions of cooperative extension; a farmer showing another farmer the impact a practice has had on his land is far more effective than an outsider telling a farmer what to do.  Similarly, ensuring that there is economic incentive for farmers to adopt practices is reflective of the cultural and socioeconomic understanding that the organization has for its stakeholders.

Unfortunately, I do not think that the changes that the Boone River watershed partnership and other similar organizations like Practical Farmers of Iowa will catalyze are going to happen fast enough to prevent severe ecological, societal, and economic implications from current agricultural and food production practices; but it is a start. On many days, it feels as though the shadow of climate change, population growth, and increased global lifestyle demands extends far beyond any local effort’s potential impacts. But, I also recognize that I could be wrong, and in that sliver of doubt I am mad enough to pursue all efforts of change. 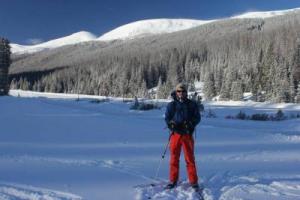 Aldo Leopold is highly regarded for his dedication to the land, research, and conservation. The same finger that pulled the trigger to end the life of a wolf, also held the pen that dispelled ink onto the manuscript for the Sand County Almanac. We have the power to change. Organizations like the Boone River watershed partnership that believe in that change and actively pursue it through evidence-based practices, collaboration with stakeholders, and recognizing social drivers have the power to make it a reality. Because, through groups and collaboration we have the ability to destroy, but we also have the power to cultivate a better world.

This guest post is by Dylan Clark, and undergraduate student at Iowa State University majoring in global resource systems and environmental studies.