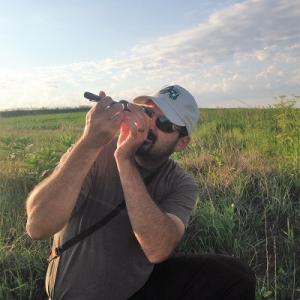 Grassland birds, such as dickcissels, meadowlarks, and upland sandpipers, have declined by almost 40% over North America between the late 1960s and today 1968–2011. This decline is being driven by loss or degradation of grassland habitat continent-wide, including replacement of grassland with agricultural land, fragmentation of remaining grasslands, degradation of rangelands in the western US, and re-forestation in the eastern US. Stopping and eventually reversing the loss of grassland habitat will be necessary to halt the decline of North American grassland birds.

An innovative approach to restore grassland habitat for at least some species of grassland birds is called prairie strips. Prairie strips has been developed by the STRIPS team of which I am a member. As a conservation practice, prairie strips converts 10–20% of a field-level watershed in a row-crop field to diverse native perennial contour buffer and filter strips. Research began on prairie strips at Iowa State University in 2005 and has demonstrated that contour strips of dense, thick-stemmed native vegetation is effective at reducing nitrogen runoff by up to 84%, phosphorus runoff by up to 90%, and sediment runoff by up to 96% (click here for a summary of STRIPS science). Early research efforts also showed that birds were 1.5–2.9 times more abundant in fields with prairie strips, but more research on their usefulness to wildlife is needed, including whether prairie strips serve as quality nesting habitat or are functioning as “ecological traps,” or habitat wildlife is fatally attracted to. 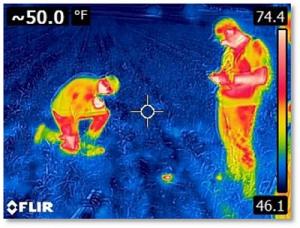 Studying the nest survival of birds that nest in grasslands presents many challenges, including difficulty locating very cryptic nests in large enough numbers to draw robust conclusions. My graduate research on the topic of bird nest survival in prairie strips came with the additional challenge of only having access to 14.8 ha of prairie strips, limiting the total number of nests within the focus land cover that was available for research. For these reasons, my initial investigation of birds nesting in prairie strips has focused on investigating methods of improving nest detection using a thermal imager and obtaining more information from each nest using iButton thermal data loggers. My Master’s thesis presents findings on these two methods for improving nest survival studies.

In my first study, I investigated the effectiveness of using a thermal-imaging camera for locating warm nests against a cool background. I found that having a thermal imager available for use under appropriate conditions did not improve nest detection rates, likely due to prevailing sunny conditions during most survey hours and dense vegetation obstructing the thermal signature from warm nests. It is possible that a study focusing on use of the thermal imager during optimal sunlight conditions might find a significant effect, but my study was a practical test of the imager’s usefulness over the whole of a regular day of field work (approximately 0500–1300 hours). Because I have already invested in the thermal imager, I will continue to use it when conditions allow, but moving forward it will not be a significant part of my strategy to find more bird nests. 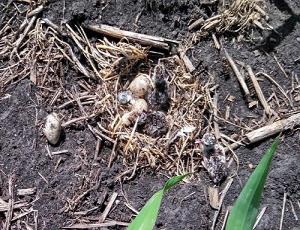 In my second study, I evaluated the use of iButton thermal data loggers for determining bird nest success or failure dates. I found that installing an iButton into grass- and shrub-nesting passerine nests did not affect egg hatching rates overall, or for nest parasite egg-accepting or egg-rejecting species analyzed as separate groups. Although I did not find statistically significant differences, a trend in the data from nest parasite egg-rejecting species was suggestive of higher failure rates that may become significant with larger sample sizes. I found that use of iButtons to determine nest failure dates increased sample sizes and resulted in higher estimates of daily survival rate with increased precision. The direction and trend of these findings were supported using a simulation study, although the magnitude of the effect was not as large and greater gains can be made by increasing the number of nests in the sample. Given this finding, in the future I will use iButtons to improve estimates of daily survival rate in the nests of all birds except for nest parasite egg-rejecting species to allow me more time to locate new nests. For nests of nest-parasite egg-rejecting species, I will continue to randomly assign treatments of iButtons or no iButtons to obtain a larger sample and clarify if iButtons are indeed reducing hatching rates.

This is how science works: a continual process of evaluation, methods development, data collection, and refinement, which in time hones in on improved understanding. In my case, this process will inform scientists’ and wildlife professionals’ recommendations for how to best implement prairie strips where grassland bird conservation is a farm-level goal. It is only by establishing supportive habitat that we will be able to stymie the loss of grassland birds.

Matt Stephenson is a graduate research assistant in the LESEM Lab. He is co-advised by Dr. Bob Klaver. He finished his Master's degree in Wildlife Ecology in 2017 and moved directly into a PhD program in the same topic area. His research is supported by funding from the USDA Farm Service Agency, USDA NIFA McIntire-Stennis Program, the Leopold Center for Sustainable Agriculture, and the Iowa DNR Wildlife Diversity Program.