Exhaustion with a side of rice and beans 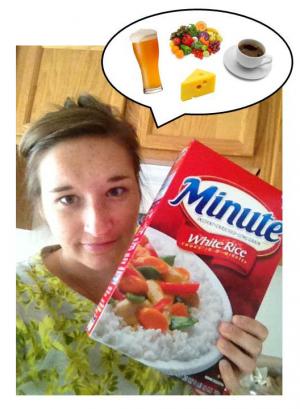 It’s 4 o’clock in the afternoon. I am exhausted, and I have a headache that I can’t seem to shake. It started slowly creeping along my forehead around noon, trying to elude my usual my mid-morning coffee. But today, like the last six days, it had nothing to fear, nothing to slink away from. I haven’t had coffee or caffeine in seven days because I can’t afford it.

A few weeks ago, I wrote a blog post on chronic food insecurity in the Heartland, and I chose to take on the SNAP challenge. As such, this week, I am living on just $31.50 (4.50 per day or $1.50 per meal). I tackled grocery shopping the day before I planned to begin the SNAP challenge; this was a challenge in itself. According to this recently published graphic, people in the United States spend an average of just 6.6% of their income on food, a value that is among the lowest in the world. We have become experts in the policies and processes required for the production and consumption of cheap food. Yet, even here, amongst this land of relative low-cost food, I was struggling to remain within my budget. I zigged and zagged up the aisles, carefully pulling items from the shelf, doing the math in my head (could I afford this?!), and then debating whether the item in my hand was worthy of being tossed into the small pile in my cart. One thing became quickly apparent as I raced up and down the aisle: the perimeter of the grocery store (i.e., where the fresh items are) where I generally get most of my groceries was far outside the budget. I was instead relegated to the land of the interior, the land of processed, prepackaged, and canned foods.

In the end, my purchase for the week included no fresh produce or meat. For breakfast, I purchased a box of cereal and a gallon of milk. For lunch, I purchased two options: (1) mac & cheese with canned green beans and (2) white rice with canned beans and canned tomatoes with chilies. Dinner was similarly simple. I purchased five boxes of HyVee brand Hamburger Helper and 3 additional cans of beans to be split throughout the week. Reading through the list, what stands out to you? One of the most immediate and striking conclusions that I came to as I stood in line waiting to pay for my groceries was that my cart had no fresh food, lacked many essential nutrients, and was pretty much the same – carbs with the occasional vegetable or protein. In trying to maintain an appropriate daily caloric intake within my budget, I had sacrificed freshness, nutrition, and variety.  As thought about my cart, I nervously recalculated the grocery bill in my head, meticulously glancing through my food and trying to decide what I could live without should I have to put something back. The nerves were luckily unnecessary because the total bill for my groceries: $31.05, just $0.45 within budget.

These themes that occurred to me in line at the grocery have remained strong throughout my week. The lack of fresh produce is a really tough adjustment for me. Fresh produce makes up a large proportion of my diet, and the lack of variety of fresh fruits and vegetables in my diet during the challenge was a staggering difference. Moreover, because the fresh produce was largely replaced with starches, I often feel full but exhausted – the key nutrients that maintain my body and allow me to feel energized and optimistic seem to be missing. I also think about food far more than usual during the week. I daydream and fantasize of returning to a variety of foods (okay in all honesty, coffee, beer, and cheese tended to appear more than other foods), of being able to join colleagues and friends for social gatherings at restaurants and bars again without passing on food and drinks, and of being able to access food that nourishes my body.

As grateful as I am that my week is nearing its end, I struggle with the simple fact that for 1 in 6 Story County residents, this is their continued reality. Their week doesn’t come to an end – it merely begins again. Their struggle to access food, not only for themselves but for their families, remains a constant stress, worry, and concern. As communities we must begin to address the realities of hunger that plagues our neighbors. So, now I’d like to challenge you: sign-up to volunteer for a shift at your local soup kitchen or food pantry, donate a row of your garden or extra produce to a food pantry—or take the SNAP challenge yourself! Hunger in the United States, in your state, in your county, in your community is real, but together we have the power to change the narrative, to end the hunger epidemic.

Live in Ames? Check out these great opportunities to volunteer:

The author, Emily Zimmerman, is a PhD student in the LESEM and PLUS Labs at Iowa State University.