Does diversity tell the whole story? 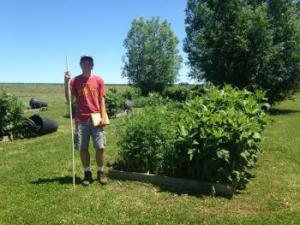 Maintaining Iowa’s highly productive agricultural landscape demands high inputs of fertilizer. When fertilizers run off the landscape in rain events or snow melt, negative consequences for water quality may arise due to enrichment by nutrients such as nitrogen and phosphorus. Developing strategies to sustain high levels of agricultural productivity while reducing nutrient runoff and its harmful consequences for water quality is a major concern of conservation science.

Luckily, conservation measures such as prairie strips offer one strategy to reduce nutrient runoff from row crop fields. Prairie strips are diverse native prairies strategically planted within or at the edge of fields of row crops to slow down water flowing at or within the soil surface, trap and filter out nutrients carried in the flow, and thereby reduce nutrient and soil addition to surface waters. The diversity of these prairie plantings is a primary factor contributing to their success as filters for agricultural runoff, but the impact of individual species (each of which contributes a rib to the umbrella of plant diversity)  planted within strips is less well known. This topic was the focus of a research project I conducted at Iowa State University.

Over the past year and a half, I’ve been fortunate to be an undergraduate research assistant in the LESEM lab, helping out with some of its various endeavors, including PEWI version testing and STRIPS bird research. I’ve learned much, had fun, and developed great relationships along the way! During this time I was also fortunate to have the opportunity to conduct my own independent research in a topic relevant to the discussion above. In my project, I wanted to know if especially large-growing species commonly planted in prairie reconstructions disproportionately influence the ability of prairie strip plantings varying in diversity to filter out nitrogen from runoff. I conducted this work as a part of a biodiversity-ecosystem function experiment at ISU's Field Extension and Education Laboratory.

In short, I posed the following questions: Is diversity itself sufficient to maximize nitrogen removal of prairie strips? Or do the identities of individual plant species included in plantings factor in as well?

Diversity itself does not tell the whole story.  The relatively high level of diversity in prairie strips is essential to their increased capacity for nitrogen removal, but this effect begs qualification. If the influence of cup plant is any indication, which species to include in prairie strip plantings is an important consideration for conservationists concerned with maximizing the ability of prairie strips to filter out nitrogen from runoff. Separating out the contribution of individuals from the whole prairie strip community may help land managers to construct even more effective prairie strips.

Jacob Hill grew up on a diversified farm outside of Newton, Iowa and graduated with a B.S. in Environmental Science from Iowa State University in spring 2017. You can find his honors thesis here. He is now an intern at Neal Smith National Wildlife Refuge near Prairie City, Iowa.