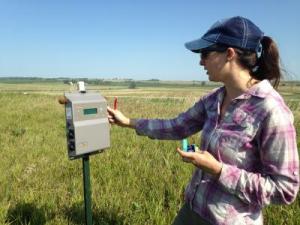 Any branch of science comes with its own unique challenges. For landscape ecologists such as us in the LESEM lab, one of these is the question of how to survey wildlife across broad spatial extents, especially with limited time, money, and personnel. Over the years, various technologies have been employed to aid researchers in maximizing results with minimal resources. For decades, animals as diverse as sage grouse, wolves, and manatees have been monitored via aerial surveys using small planes. Secretive species can be tracked using telemetry, and tiny geolocators have been used in countless studies to determine the paths of long-distance migrants. One area of research which has been steadily growing involves using sound recordings of animals to monitor their presence over widespread areas. With this type of monitoring, wildlife species that are inherently difficult to track and study become accessible to scientists.

A classic example of using recordings to improve wildlife knowledge is for whales: many species spend much of their time in deep, murky waters, migrate massive distances, and are generally hard to find. Studying these animals the traditional way (from a boat) is often cost prohibitive, dangerous, and time intensive. Some of the best current techniques involve placement of hydrophones in the habitat or along the migratory route of these whales. Depending on the study, recordings can be collected after a period of time or streamed back to a lab hundreds of miles away for real-time analysis. Studies like this have enabled scientists to gather useful data that otherwise would have been difficult or impossible to obtain. A stunning example of marine bioacoustics in action is the Right Whale Listening Network, a project of the Bioacoustics Research Program (BRP) at the Cornell Lab of Ornithology. A series of buoys equipped with hydrophones constantly monitor the waters of Massachusetts Bay, home to one of the busiest shipping channels in the eastern United States. These buoys provide information on the presence of endangered Right Whales, which is then given to ship captains in order to allow them time to slow down and hopefully avoid colliding with and possibly killing a whale.

In the LESEM lab, we are taking advantage of the many benefits provided by bioacoustics to study the impact of prairie strips on grassland birds. Currently, we have over 40 Autonomous Recording Units (ARUs; picture above right) placed in farm fields across Iowa and northern Missouri. These units are set to record for one hour at sunrise each morning, which captures the most active singing hour for birds. After several months of recording, we bring the data back into the lab and analyze it. This is done using Raven, a software package developed by the previously mentioned Bioacoustics Research Program at the Cornell Lab. Last spring, I had the incredible opportunity to visit the Cornell Lab for a week to learn how to use Raven. For our research, we use the software to convert our recordings into spectrograms (pictured below). With this process, an hour of listening quickly becomes several minutes of sifting through the visual representation of the soundscape. With some time and training, an observer can soon learn to differentiate between bird songs visually as easily as auditorially. This method opens up huge doors for our research with STRIPSby enabling us to “listen” to birds in dozens of farm fields at the same time.

Looking beyond our immediate use of bioacoustics for monitoring bird response to prairie strips, having these recordings gives us a massive bank of data that can be used for future research. Some questions that could be explored with our data include how birdsong differs in certain locations based on a variety of environmental factors (traffic noise, crop cycles, or weather events), how bird “dialects” change over time in a single location, or whether individuals of the same species display regional song variation across the state. This is part of the beauty of modern bioacoustics research: a permanent record of wildlife vocalizations can be stored, enabling researchers to not only check their own work and that of others in the field, but also to ask questions that other researchers did not have the time or ability to explore with the same data.

During our first year of collecting audio data, we have recorded some interesting things. On a farm in  Carroll County, we heard a minutes-long chorus of a Coyote (image at right) family as the sun rose. We caught glimpses of the haunting, distinctive whistle of Upland Sandpipers on several farms across the state. We were even able to make out the territorial call of the secretive Northern Bobwhite. I expect to see the field of bioacoustics continue to advance rapidly in both technology and the number of scientists of different disciplines who take advantage of it. The next few decades in the field should be exciting ones, and I can’t wait to see what comes next!

Julia Dale is working on her Master’s degree in Wildlife Ecology in the LESEM lab. She thinks the best time to view prairie strips is at dawn, preferably in early-June.