Acres planted everywhere and not a bite to eat: The reality of hunger in Iowa 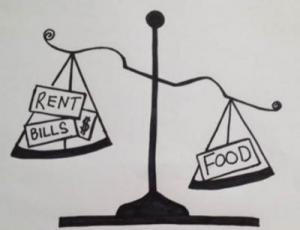 Last year, the state of Iowa harvested 13,100,000 acres of corn and 9,240,000 acres of soybeans. Yet, this article recently published in National Geographic Magazine, reports that 1 in 8 Iowans are going hungry. According to Feeding America’s Map the Meal Gap, in Story County where Iowa State University is located, the number jumps even higher to 1 in 6. Here, nestled within the dark, rich soil of vast agricultural success thousands don’t know where their next meal will come from. This seems slightly counterintuitive, especially if you’re not familiar with the agricultural production system in the U.S. Cornbelt region. For many, it seems strange that in one of the most agriculturally productive states in the country, we aren’t able to meet the food needs of the population. But there’s more to this story.

This brings me back to my initial paragraph; though we produce acres of agricultural commodities, we produce little food fit for immediate human consumption. And our fellow Iowans are paying dearly for these decisions. Many of the food insecure in Iowa are forced to turn to food pantries such as the one I volunteer at, soup kitchens, and food stamps (now a part of the SNAP program) in order to have food on their tables. While food pantries and soup kitchens provide a critical service by giving immediate access to calories that may be vital to someone that is hungry, they are simply not designed to procure, store, and distribute fresh nutritious food. Instead, they load food boxes with highly processed products with little nutritional value – foods that can lead to severe health concerns (e.g., obesity, diabetes, high blood pressure and cholesterol, etc.). Food stamps provide similarly disappointing opportunities. According to the National Geographic article, with the passage of the most recent farm bill, food stamp benefits per person declined to just $133.07 per month per person – that’s less than $1.50 per meal. Provided with such a small budget and trying to work multiple jobs to make ends meet, many families simply cannot afford the monetary cost and time cost to purchase and prepare fresh, nutritious foods.

Though I’ve read a fair amount on hunger in America and have volunteered at multiple food pantries and soup kitchens, I have never personally experienced chronic food insecurity or had to choose between paying my rent and putting food on the table for my loved ones. After reading the article in National Geographic Magazine, seeing my fellow Iowans really hit home for me and I decided I wanted to try and understand the challenges that my neighbors are going through each day. As a result, I am going to take what has become known as the SNAP Challenge, and live on $4.50 per day for a week (3 meals per day, $1.50 allotted for each meal). I want to be clear: I understand that my experience has an immediate end; I will not have the additional stress from enduring chronic food insecurity. My week is simply a simulation of what my fellow Iowans are going through and I do not mean to make light of anyone else’s experiences or claim that my experience is a true, realistic representation of food insecurity. Rather, like others (e.g., Ron Shaich of Panera Bread, Bob Aiken of Feeding America) that have attempted this journey, I hope to gain a deeper understanding of the true burden of chronic food insecurity in Iowa and to highlight this important issue to those of you who may read this blog post.

So, check back to the LESEM blog page in a few weeks. I’ll have chronicled my experience from start to finish, using the prompts put forth by others who have accepted this challenge. While others have accepted this challenge, I am particularly interested in bringing greater attention to hunger in Iowa – a place where agricultural wealth is unrivaled, but hunger is growing.