Dr. Paul L. Errington, quoted by Animal Ecology Today as one of the "four great pioneers of animal ecology", was a professor of wildlife biology at Iowa State University from July, 1932 until his retirement. Dr. Errington's love and understanding of nature is shown in four popular books: Of Men and Marshes, The Red Gods Call, Of Predation and Life, and A Question of Values. A Question of Values is a collection of essays published posthumously in 1987. Paul L. Errington passed along a priceless heritage of conservation wisdom and insight to those who have the opportunity to read what he wrote, who benefit from his skills, and who must continue to question and enlarge upon his findings. On the occasion of the annual Paul L. Errington Memorial Lecture, we recognize and pay tribute to his special qualities as a person and as a scientist. 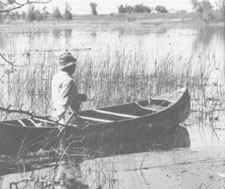 Paul Lester Errington (1902-1962) Paul L. Errington was born on June 14, 1902, in Bruce, South Dakota. He graduated from Brookings High School in 1921, South Dakota State College in 1929, and earned the Ph.D. degree from the University of Wisconsin in 1932. He came to Iowa State University in July, 1932 as a Research Assistant Professor and remained at ISU throughout his career. He was promoted to Research Associate Professor in 1938 and to Professor in 1948. In 1958-59 he was on leave to serve as Visiting Professor at Lund University, Sweden.

Paul Errington and Carolyn Storm were married in 1934. The couple raised two children in Ames: Peter, of Washington, D.C. and Frederick, of Amherst, Massachusetts.

We remember and honor Dr. Errington as a naturalist in the most modern usage of the title. Life Magazine in 1961, featured Paul Errington as one of ten outstanding naturalists of North America. He not only was an expert at "reading sign"--tracks, prey remains and such--but was also expert at evaluating the forces that were affecting entire populations of animals. The animals he most intensively studied were bobwhite quail, minks, muskrats, and great horned owls.

Dr. Errington's elucidation of the automatic adjustments in natural populations gave a new interpretation to the concept of the "balance of nature." His recognition in this field was well expressed in Animal Ecology Today by Professor F. S. Bodenheimer of Hebrew University of Jerusalem. This book was dedicated to "four great pioneers of animal ecology," one of whom was Paul Errington. Principles credited to Dr. Errington in the book relate to "(1) the oft-misunderstood and exaggerated role of predation in nature; and (2) the complicated mechanisms of compensations, interplay, interruptions, deflections and successions that characterize free-living populations".

While much has been written about Dr. Errington and his accomplishments, it is often an individual's own words that state the case for our remembering that person. In July, 1947, The Journal of Wildlife Management published an article titled "A Question of Values" by Paul L. Errington [11(3):267-272]. The following quote is from pages 269-270 and 272.

To me, with gun in hand or without, the appeal of the out-of-doors seems chiefly conditioned by the relative diversity and completeness of its native fauna and flora and the naturalness of its topography.

Although we may not anticipate a general return of bison herds to the central plains of North America as long as we retain our present social and economic system, the perpetuation of much of our natural out-of-doors is not incompatible with modernity. The growing literature on integration of ends for sound and permanent land use contradicts the thesis that 'progress' must inevitably be accompanied by what we have been pleased to call the 'conquest of nature,' with its top-heavy artificialities and its wastefulness.

Many of the problems of conservation and management are vexatious and appallingly involved. It is not hard to understand why conservation or management practice (or policy) has not been free from confusion and cross purposes or how it may be guided less by long-time than by immediate objectives. In common with other human endeavors, conservation or management probably always will be attended by its share of futility and short-sightedness. Regrettable though this may be, worse still is the outright destruction of the values needing most to be preserved -- especially in management programs sponsored by agencies subject to public pressure or catering to circumscribed groups.

It is fitting to strive for 'business-like' efficiency in wildlife management and to take aggressive action to stay or reverse the forces that impoverish the continent. Management, in the sense of judicious manipulation both of organisms and of their environment, should be legitimate and desirable as long as the price is not too great.

Within reason, we and our editorialized but cheated posterity should be able to think of wildernesses extending beyond highways, of barren grounds and ice-fields and deserts and unlogged forests and untampered lakes and streams. We should know of marshes with sandhill cranes and the more retiring of water birds, of rivers where otters live, of mountains where martens, fishers, wolverines, cougars, wolves, grizzly bears, and native sheep and goats exist in some security. Close to home, we should be able to find natural retreats in appropriate places, to see an eagle, osprey, loon, or one of the larger falcons on occasion; still to watch, among the sights that belong, the red-tailed hawk in the sky; still to hear, among the night sounds, the hooting of the horned owl in the woods.

In March, 1962, Professor Errington was awarded the Aldo Leopold Medal, the highest honor bestowed by The Wildlife Society. That same year his monograph, Muskrat Populations, was selected for the Iowa State University Press award for faculty publications.