This is a collaborative project between:

To characterize species-level traits that modify ecosystem-level C balances from their abiotically driven means, and to integrate these results within a modeling perspective.

Our results from the ECOS-1 project demonstrated differences in carbon cycling among these tree species planted under similar conditions. These results raise the following questions, given that tree species differ in NPP, biomass, aboveground:belowground partitioning, carbon chemistry, and effects on soil organic carbon stocks. To what extent do these species differ in: 1) Gross Primary Productivity (GPP); 2) Respiration; and 3) Soil organic matter (SOM) stabilization.

Net ecosystem exchange of atmospheric CO2 (NEE, the balance between CO2 uptake from and release back into the air, by an ecosystem) represents the balance among at least three other carbon fluxes:  gross primary productivity (GPP), aboveground plant respiration (Rag) and soil respiration (Rsoil). The soil carbon balance is similarly complicated:  Rsoil is derived from both root-rhizosphere respiration (Rrrh, live roots plus microbes) and soil organic matter decomposition (Rsom, Raich & Mora 2006). Each of these individual processes should be known and modeled correctly if spatial and temporal variations in NEE are to be understood and predicted.

It is not just fluxes that control forest C balances; it is also the residence times. The longer C stays in organic form, the greater the impact on the atmosphere. Plant traits that promote long residence times of soil organic matter (SOM) or living biomass are potentially as important as factors that control fluxes, in terms of their influence on forest C storage. Production of secondary compounds such as lignin may promote both long-lived tissues (e.g., leaves, Bloom et al. 1985) and SOM sequestration (Paustian et al 1992). 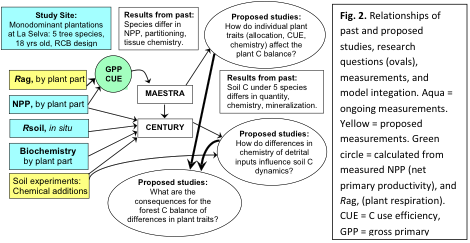